In view of the failure of all attempts at a peaceful settlement that have been made since 1996, and renewed with greater intensity from 1998 onwards with the various UN resolutions and the Lusaka Agreement in 1999, the forms of action currently offered by the UN for resolving the conflict in the Great Lakes Region must give way to a new, active diplomatic initiative in which the European Union and its member states are determinedly involved along with the United States of America, so as to enable the Lusaka Agreement to be effectively implemented. This new diplomacy should have two phases :

1. Negotiation among the belligerents

The UNIR MN invites the European Union to intervene vigorously in the process of re- establishment and maintenance of peace in the region, and to use all its influence for the conclusion of a negotiated peace agreement that is fair to all parties and insists on respect for the territorial integrity and national sovereignty of Congo-ZaiÌˆre.

To achieve this, the UNIR MN proposes that the European Union appoints a â€œ Senior European Union Mediatorâ€, whose role should be to mediate the opposing claims and conciliate any resentments arising among the countries involved in the conflict, so as to arrive at an effective implementation of the Lusaka Agreement.

As well as arranging for a resumption of contact, the UNIR MN invites the Senior Mediator to put the UNIR MN draft Regional Stability Pact to the states involved in the crisis of the Great Lakes Region, and to convene an Intergovernmental Conference for this purpose under the auspices of the European Union.

If negotiations among the various parties concerned should fail, then the next stage would necessarily be coercive: an intervention with a view to coercion, followed by an international reconstruction and peace-keeping operation in the region.

This coercive diplomacy should be in two distinct, but still complementary stages:

In order to make recalcitrant states respect the undertakings entered into at Lusaka, the UNIR MN invites the European Union and its member states to adopt economic and/or diplomatic sanctions. These could be the result of an independent initiative on the part of the Union: such sanctions can be taken on the basis of two elements of the Treaty on European Union : Title V (Provisions on a Common Foreign & Security Policy) and/or Article 301 of the Treaty establishing the European Community (TEC).

In addition to its own unilateral action, the European Union could also take economic and diplomatic measures, against those states which fail to respect the provisions of the Lusaka Agreement, with a view to a Security Council Resolution adopted on the basis of Article 41 of the Charter of the United Nations.

However, if all these measures should prove insufficient, then recourse to armed force ought not to be ruled out.

It is the UNIR/MN’s deep conviction that if the above economic and diplomatic measures prove inadequate, then only armed force, by which we mean true military engagement duly authorised by the UN Security Council, can quickly compel the foreign armies operating in the territory of Congo-ZaiÌˆre to pack up and go.

Since, however, the United Nations Organisation has no effective material or human resources of its own for the purpose, the UNIR MN invites the European Union and its member states, with the support of the United States of America, to recommend to the Security Council the passing of a Resolution authorising regional defence organisations, on the basis of Chapter VIII of the Charter (Article 52), to carry out in an appropriate manner the coercive measures adopted by it under Chapter VII of that Charter (Article 42).

It is the view of the UNIR MN that the intervention of the WEU or NATO would itself be decisive; recourse to such intervention is essentially justified by the avowed inability, for the moment at least, of the Organisation of African Unity (OAU) to resolve the conflicts within and/or between states which are overwhelming Africa.

Moreover, the classic peace-keeping and international security operations undertaken by blue-helmeted UN forces have continually demonstrated their remarkable ineffectiveness: for proof, one need only consider the situation in southern Lebanon, or in Cyprus. In these two cases we can only observe with consternation the impotence of UN forces and their inability to guarantee or maintain peace and security in their allotted areas.

The UNIR MN now considers that MONUC, whose mandate is clearly restricted to observation, demilitarisation and monitoring of the withdrawal of the foreign forces present on the territory of the Republic, cannot reasonably be expected to bring a recovery of full sovereignty to Congo-ZaiÌˆre. 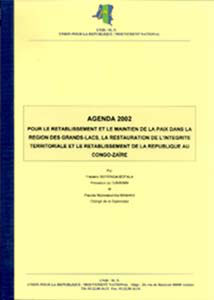